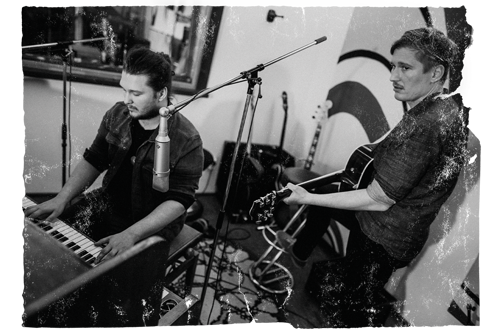 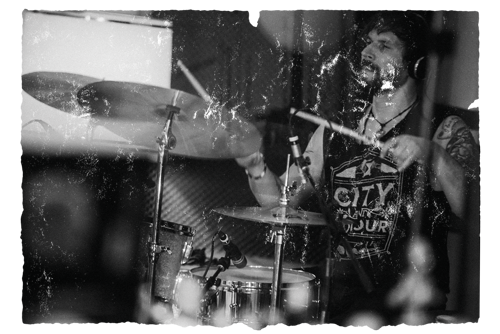 In 2015, The Wake Woods released their feted debut album „Get Outta My Way“, immediately followed by 12 weeks in the Top 25 of the Rock DJ charts, support shows for Deep Purple and Status Quo and a rip-roaring gig at the 40th anniversary of the legendary WDR Rockpalast TV show!

Since then, a lot has happened to this Berlin-based combo: Countless club shows; the sophomore album „Blow Up Your Radio“; line-up changes in 2019; further tours with Birth Of Joy in the Netherlands as well as Austrian band The Weight; Deichbrandfestival 2019. Then came Covid. And the band came to a stuttering, shuddering halt…

As if! Instead of admitting defeat, the band centred on brothers Ingo and Helge Siara exploited forced hiatus during the lockdown of 2020 to hone their creative skills and embark on an ambitious new song-writing project.

With newcomer Sebastian Kuhlmey joining on drums, the band invested their last pennies in recording sessions at Hamburg’s famed Clouds Hill Studio for the „Remedies“ EP before immediately beginning to write „Treselectrica“, their new album slated for release in January 2022.

Ingo and Helge Siara’s songwriting talents were nurtured by their family. Their mother is a singer while their father was a musician and composer. Even their great-grandfather was a well-known piano maker. The Siara brothers were infected with the rock’n’roll virus when they were teenagers.

Ingo remembers: “The first time I heard ‚Get Born‘ by Jet was when I was 13 years old. That really shaped me personally. At the time there was nothing like it for me. That pushed me to search for where that music came from.”

With Sebastian Kuhlmey, the brothers have found a perfect ally to break new exciting new ground with their family enterprise The Wake Woods. “Each of us in the band has a range of influences and experiences. We wanted to make the most of that and do justice to the sound of the new line-up as a trio, while also exploring new approaches to song-writing,” says Sebastian.

Fans of Band Of Skulls, The Dead Weather or the Rival Sons should pre-order their copy of Treselectra now. And while being playfully reminiscent of the heyday of Arctic Monkeys or Stereophonics, there’s so much more going on here. The Wake Woods show a more aggressive and eagerly experimental side here, fostered by the skilful work of indie producer and Berlin resident Fabio Buemi whose credits include artists like Billie Eilish and J. Mascis (Dinosaur Jr.).

The Italian producer’s fondness and for well-produced punk and underground music ensure that while the new album is meticulously constructed, it also features an all-pervading rock and roll energy that propels it forward from the first bar to the last.

The whole album was captured at Kreuzberg’s legendary Wong Studio, one of the hottest studios in Berlin for music featuring loud guitars. “When we started writing the new album, it became clear to us that as a band from Berlin we had never recorded in our hometown. We were determined this time that everything was going to be created with a connection to Berlin,” says guitarist and multi-instrumentalist Helge Siara.

Helge says that he’d long had a vision “to integrate more voices, as well as synthesizers and wind instruments into the songs, to free us from the past. Fabio was instantly on fire. As a producer, he played a big part in how the songs sound now.”

And so The Wake Woods pushed forward relentlessly and fearlessly through “Treselectrica”, daring to venture into psychedelic realms, play with shimmering synthesizers and let some of its more dynamic passages swell to dramatic size. All the while, the trio show their talent for soulful and intimate songs that speak to us all.

Condensed to 10 electrifying songs, Treselectrica shows The Wake Woods at the peak of their powers, sparking eager anticipation for the new club dates and festivals planned for summer 2022.

MADE WITH  BY DOIT-DIGITAL.DE

We use cookies on our website to give you the most relevant experience by remembering your preferences and repeat visits. By clicking “Accept All”, you consent to the use of ALL the cookies. However, you may visit "Cookie Settings" to provide a controlled consent.
Cookie SettingsAccept All
Manage consent

This website uses cookies to improve your experience while you navigate through the website. Out of these, the cookies that are categorized as necessary are stored on your browser as they are essential for the working of basic functionalities of the website. We also use third-party cookies that help us analyze and understand how you use this website. These cookies will be stored in your browser only with your consent. You also have the option to opt-out of these cookies. But opting out of some of these cookies may affect your browsing experience.
Necessary immer aktiv
Necessary cookies are absolutely essential for the website to function properly. These cookies ensure basic functionalities and security features of the website, anonymously.
Functional
Functional cookies help to perform certain functionalities like sharing the content of the website on social media platforms, collect feedbacks, and other third-party features.
Performance
Performance cookies are used to understand and analyze the key performance indexes of the website which helps in delivering a better user experience for the visitors.
Analytics
Analytical cookies are used to understand how visitors interact with the website. These cookies help provide information on metrics the number of visitors, bounce rate, traffic source, etc.
Advertisement
Advertisement cookies are used to provide visitors with relevant ads and marketing campaigns. These cookies track visitors across websites and collect information to provide customized ads.
Others
Other uncategorized cookies are those that are being analyzed and have not been classified into a category as yet.
SPEICHERN & AKZEPTIEREN